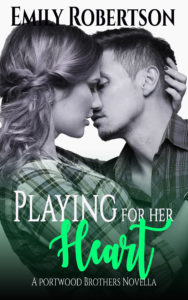 Wes had it all.  He had an amazing job, a great family, and the best friends.  He lived by the motto “work hard and play hard.”  The only regret he had was the way things ended with his college girlfriend, Hailey.  He knows he could have handled that situation better, and he has lived with that ever since the day they broke up.

Hailey used to love her job, the city, and life.  That was until a guy at work sexually assaulted her and everything went downhill.  Now the job she loved is her personal hell, and the city she used to enjoy doesn’t seem so great.  She’s got baggage, a lot of it, and so many regrets she can’t even count them all.

When Wes learns that something has happened to Hailey, he finally puts his hurt and pride away and reaches out to the woman he once loved.  She may think she’s unlovable, but he’ll show her that she’s wrong.  A little work never bothered him before especially when he’s playing for her heart.  He’s all in and ready to show Hailey she can depend on him.